“Frankenstein” (2013)
Script by Nick Dear (from the novel by Mary Shelly)
Senior Project by Lauren LaCasse at the University of Denver
Composed small ensemble music for entr’acte, prelude, and postlude.
Performed by

In "Hamlet" performed at Providence College (2018), Hannah Y Greene was asked to compose an "Ophelia Theme." This theme was re-worked for different scenes including a "Love Scene" between her and Hamlet early in the play; a "Dream Ballet" when she's dreaming about Hamlet; a "Fight Scene" when Hamlet tells her to get to a nunnery; and a "Funeral" theme after she kills herself.

In "Hamlet" performed at Providence College (2018), Hannah Greene was asked to compose songs for Ophelia. In the play, Ophelia goes crazy and recites these poems. In this staged rendition the Director wanted them written into songs, as if they are songs from her childhood that have resurfaced due to her extreme sadness loosing her father and her love, Hamlet. 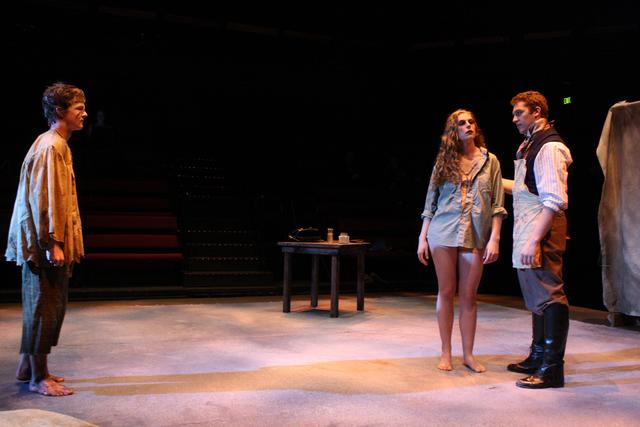 Musical Examples from the staged production of "Hamlet"

Hannah Y Greene has worked extensively with live theatre productions. Having done acting since childhood, worked as a House Manager at the University of Denver, and Directed a children's theatre group for multiple years, she understands the process and needs of the theatre.

Composing music for a live production requires a very different thought process. Most of the time, the blocking has not been finished yet, so as a composer, she must work closely with the Director to get a sense of their vision so that Hannah can work out how long each piece of music should be, where, and what kind.

Music within the play must be flexible for live mistakes, speed changes, and other things that might happen - this requires the the music to be easily cut short or looped as necessary.

Entre-acte music is written to help dictate a change in location, time, or other ways to help move the story into the next scene. These usually need to be very short but help cover the "black ninjas" as they make scene changes on stage.

Written and Directed by Katy Williams

The "Myth of Pegasus" was written and director by Katy Williams. Using life size puppets that Katy designed and built with her team, they play tells the story of Bellerophon who captured Pegasus in order to save the people from the monstrous Chimera.

Aside from a short narration at the beginning of the play, the whole production was told through action and music. Katy Williams hired me, Hannah Y Greene, to compose, orchestrate, and produce the 30+ minutes of music to which she blocked the action of the play to. The music is divided up into 4 different scenes. There are reoccurring themes for Pegasus, Bellerophon, the Chimera, and the goddess Athena.

For more info go to: https://www.facebook.com/katywilliamsdesign/